You can reach me by e-mail at: wallyjr@manawatu.gen.nz

Special page to adopt a Rescue Shar Pei or to Re-home your Shar Pei.

Album of our Champion Shar-Pei

Family Album of our Shar-Pei

A History of Shar-Pei in New Zealand

CARE OF A SHAR PEI PUP or OLDER DOG.

Food for Thought. Diets of Pets.

Links to other Shar-Pei home pages

Know how to look after your dogs. Origins of Shar Pei

Click here We have been showing and breeding Shar-Pei for just over 9 years and here are our Shar Pei both past and present.

Our first Shar Pei was Te Te or to give hime his kennel name: Wenjia Zhi Shou Juanr Gou.
His father is NZ CH Yacanto Rain Check (Imp-UK)
Which means his father was imported from the UK and is a New Zealand Champion.
His Mum is Yacanto Tea Rose (Imp-UK)
Te Te has sired his last litter and now has retired from breeding.
Te Te is currently in his tenth year.
Te Te has since passed away

Our second Shar Pei was Ming; her kennel name is Zebedee Hong Ming and she was imported from Australia.
Her dad is Wayworns Fingertail Gigilo (USA) (IMP-UK)
Her Mum is Fingertails B Bop Mai Tai (CSPCA) (IMP-USA)
To date Ming has produced some wonderful puppies for the ring and for pets.

Ming has retired from Breeding. Ming is pictured here with her first litter of 2 boys.
Ming has since passed away. 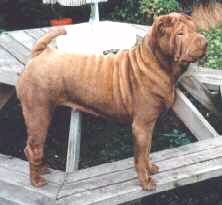 Our next Shar Pei was Chi Tou; kennel name been, Wenjia Fchi Tou.
Her Dad was NZ CH Zebedee Wizzard of Oz (Imp-Aust)
Her Mum was Wenjia Haode Ci Shi
Chi Tou produced two litters and the puppies were so good we have kept a boy from her first litter, which we have called Zen.
Chi Tou has since passed away

Next we have TEEM SUM, who is a lovely black brush coat. She became a NZ Champion in December 1999
She is also a grand daughter of Ming.
Kennel name: Shimao Hei Tanzi:
Sire: Hongming Dongfang:
Dam: Shimao Shangu Yinger:
Teem Sum has had two litters and has since been spayed.

Ti is the first puppy born from Te Te and Ming and was not shown.
Ti produced two small litters and then was spayed.
A diligent mother and a lovely pet.
Ti has since passed away

Zen was born out of Te Te and Chi Tou.
Kennel Name is HongMing Chitou-Tete Leiting
Zen Became a NZ Champion in August 2000.
He has sired 5 litters.

Zen at home after winning his last Challenge to becoming a N Z Champion.

Mao
Mao was the last girl to join the kennels.
Her first litter produced 8 puppies in 2001.
Coming from Showler Shar Pei Kennels
Kennel name is Showler Mustard Opal
Mao is a NZ Champion and is a quarter 'Blue'.
Mao has since passed away. To the top of this page Family Album on our Shar-Pei

Information about our next litter

A History of Shar-Pei in New Zealand

Food for Thought. Diets of Pets.

Links to other Shar-Pei home pages

Know how to look after your dogs. Origins of Shar Pei